Well written and inspiring!
Follow this young writer to for encouragement. Here is her link 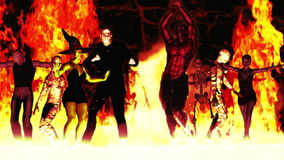 They were in a bottomless pit
A demon with broken teeth began to drum
And all the other demons echoed
Deception and deception
In a moment a lady called worldliness and immorality took the stage
The reddishness of her lips
Was more inviting than Adam’s apple. Youths, even the old shook their waist
Dancing to the music of hell