the past 36 hours, law enforcement received information directing them to a person of interest, who ultimately became a suspect.

In the most recent explosion before the suspect’s death, a package exploded at a FedEx sorting center near San Antonio early Tuesday, and a second unexploded bomb was discovered on the same day at another FedEx facility near Austin.
Those two packages are connected to four previous bombings that left two people dead. FedEx said the person who sent the package that exploded Tuesday also shipped a second one that was turned over to law enforcement officials.
FedEx said it provided authorities with “extensive evidence” from its security system on the packages and the person who shipped them.
In the incident near San Antonio, the device detonated on an automatic conveyor, Police Chief Michael Hansen said. A female employee was treated on site and released. The FedEx facility was not the intended target.
A possible explosion reported Tuesday night at a Goodwill store in Austin turned out to be unrelated. In that incident, an employee was injured by two “artillery simulators” in a donation box, said Ely Reyes, Austin’s assistant police chief. The employee was treated and released from a hospital, Reyes said.

As investigators search for answers, they are checking the cameras at the facilities from Tuesday’s incidents, the source said.
Investigators believe the same person is behind all the devices, the source said, adding that the devices have a lot of consistencies. They are similar in the way they are made and use the same items, including a “mouse trap” or a “close pin” switch, according to the source.
“We made one to show everyone what it looks like and we did it in an hour,” the source said. The the bombmaker may have taken longer to do it to avoid blowing themselves up, according to the source.
The level of bombmaking skill doesn’t necessarily point to military experience, the source added.
Investigators said the package that was found intact Tuesday may yield some clues.
“Now we have the blueprint and possible DNA on the inside of the bomb. So teams are working to render it safe and then look for DNA,” the source said. The outside of the package would have been touched by employees at the store where it was dropped off and by the bombmaker, the source said.
The bombmaker may have been wearing gloves.

Of the four previous explosions in Austin, the first three involved cardboard packages left in front yards or on porches. They weren’t delivered by the US Postal Service or services such as UPS or FedEx, police say.
Those three explosions — one on March 2 and two more on March 12 — killed or wounded three African-Americans and one Hispanic person. They happened in east Austin areas with predominantly minority residents. Some residents expressed concern the attacks might have been racially-motivated. 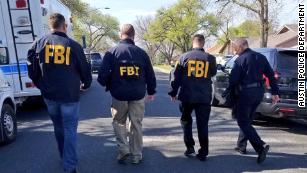 Austin police: We’re dealing with a serial bomber 01:46
Those three blasts all happened after someone left explosives-laden packages on the victims’ doorsteps.
In the fourth blast, a device was triggered by a tripwire, injuring two white men in a predominantly white area.
Police have not ruled out the possibility that those bombings could be hate crimes. They urged residents to pay attention to their surroundings, and not approach or touch anything that looks suspicious.