AS TRUMP LASHES OUT AT MUELLER, CONGRESS AT STANDSTILL ON SHIELDING SPECIAL COUNSEL 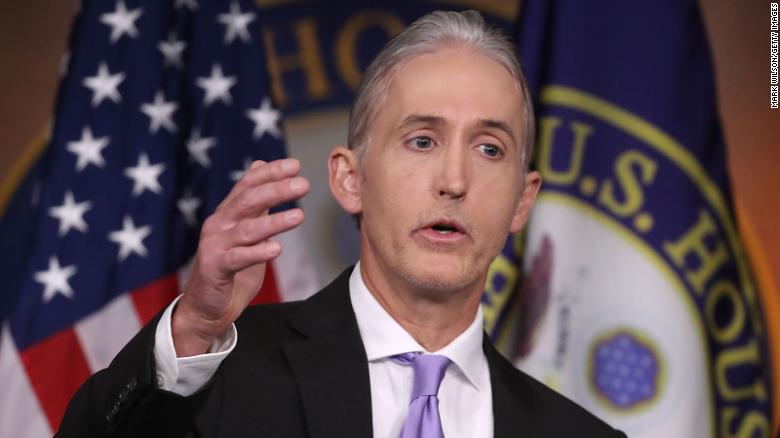 Republican leaders have said they see no reason to intervene given what they considered good cooperation between the White House and the Mueller team.
But that was before this weekend.
Tensions escalated after Trump’s lawyer, John Dowd, issued a prayerSaturday that Deputy Attorney General Rod Rosenstein would “bring an end” to Mueller’s probe into possible collusion between Trump’s campaign and Russians in Moscow’s meddling in the 2016 election.
That was followed by unprecedented tweets from the President going after Mueller by name, an approach he’s avoided as he’s sought to appear accommodating in the investigation.
“The Mueller probe should never have been started in that there was no collusion and there was no crime,” he tweeted Saturday.
Trump followed this Sunday morning with another tweet more directly condemning Mueller’s team.
“Why does the Mueller team have 13 hardened Democrats, some big Crooked Hillary supporters, and Zero Republicans?” Trump wrote.“Another Dem recently added … does anyone think this is fair? And yet, there is NO COLLUSION!”
Reacting to the backlash over Trump and Dowd’s remarks, White House special counsel Ty Cobb emphasized in a statement Sunday night that the President is not considering firing Mueller.
“In response to media speculation and related questions being posed to the administration, the White House yet again confirms that the President is not considering or discussing the firing of the special counsel, Robert Mueller,” Cobb said.

How did Republicans react?

Republican lawmakers on Sunday sought to warn the President that any action against Mueller would not be tolerated by Congress.
“If he tried to do that, that would be the beginning of the end of his presidency,” said Sen. Lindsey Graham of South Carolina on CNN’s “State of the Union.”
Sen. Jeff Flake of Arizona made similar remarks on the show.
“I mean, talking to my colleagues all along it was, you know, once he goes after Mueller, then we’ll take action,” he said.
House Oversight Chairman Trey Gowdy, himself a former federal prosecutor, also defended Mueller.
“I think the President’s attorney frankly does him a disservice when he says that, and when he frames the investigation that way,” the South Carolina Republican said on “Fox News Sunday.” He added later: “If you have an innocent client, Mr. Dowd, act like it.”
Their comments potentially signal stepped up action by Congress as lawmakers return this week to the most serious threat they’ve faced of possible action by the White House against Mueller.
But it’s unclear whether Congress will make any moves. Lawmakers face a must-pass spending bill amid other major action in the Senate on sex trafficking and a war authorization — all before they leave town Friday night for a two-week recess.

Concerns about Trump trying to push out Mueller have been brewing since the former FBI director was appointed to the job last May. CNN reported in January that Trump wanted Mueller fired last June, but White House counsel Don McGahn refused to order the Justice Department to let the special prosecutor go. The New York Times first reported the incident, citing four people who were told of the matter; Trump denied that he moved to have Mueller fired.
Senators introduced two bipartisan bills last year aimed at protecting a special counsel from political pressure from the White House. The “Special Counsel Integrity Act,” introduced by Republican Sen. Thom Tillis of North Carolina and Democratic Sen. Chris Coons of Delaware, would allow a special counsel to be fired only for “misconduct, dereliction of duty, incapacity, conflict of interest, or other good cause, including violation of DOJ policies.”
Another bill, the “Special Counsel Independence Protection Act,” was introduced by Graham and Democratic Sen. Cory Booker of New Jersey and would require a federal judge to first sign off on any action to discipline or fire a special counsel.
The Senate Judiciary Committee held a hearing in September that looked at the two bills, but the legislation has gone nowhere since then.

The reaction by GOP leadership

In January, after the news broke that Trump had tried to get Mueller fired, the chairman of the Senate Judiciary Committee urged Trump to let Mueller’s investigation “work its course” and said he was “open” to considering the legislation that would shield the special counsel from political pressure.
“I just don’t think the President — as unpredictable as he is — would fire Mueller, and I take the view, and I said so maybe not directly to the President, but indirectly to the President: Just let this work its course,” Republican Sen. Chuck Grassley said in an interview with CNN.
At around the same time, Senate Majority Leader Mitch McConnell said he saw no efforts underway at the White House to undermine the Mueller investigation.
“I don’t feel any particular need to reach out to protect someone who seems to need no protection,” McConnell told reporters. A spokesman for the majority leader did not have anything to add Sunday.
Grassley said he wanted the two bills to be reconciled and then he would examine any potential constitutional concerns about the separation of powers.
His spokesman, Taylor Foy, did not comment directly Sunday on whether the committee will move forward with the legislation, but said, “Chairman Grassley has said on many occasions that the special counsel’s investigation should be allowed to continue uninterrupted.”
Coons issued a statement Sunday calling for more senators to support his bill with Tillis.
“Any attempt by the President to obstruct or remove the special counsel would create a constitutional crisis and represent an attack on the core American principle that nobody, including the President of the United States, is above the law,” he said.
A spokesman for Tillis did not immediately respond to a request for comment Sunday on whether the senator will try to bring more attention around his bill given the events over the weekend. In January, Tillis spokesman Daniel Keylin said the bill didn’t have the support it needed to move through Congress, in part because the President’s team was showing signs of cooperation with the special counsel at the time.
Tillis and Graham also joined with Grassley last week to call for a second special counsel to investigate alleged abuses by the FBI and the Justice Department’s handling of the Trump-Russia investigation up until the appointment of Mueller — a move that backs up complaints made by Trump about the Justice Department.
Responding to Trump’s tweets this weekend, the top Democrat on the Judiciary Committee, Sen. Dianne Feinstein, tweeted Sunday that “the President must cease and desist with these attacks.”
She was one of several other Democrats who took to Twitter this weekend to defend Mueller, while Republicans were largely silent aside from those who appeared on the Sunday morning shows.
A spokeswoman for House Speaker Paul Ryan did not comment directly on the question of whether Congress should move forward with legislation to safeguard Mueller. But when asked about the President’s tweets this weekend, AshLee Strong said, “As the speaker has always said, Mr. Mueller and his team should be able to do their job.”