EGYPT WANTS ANSWERS IN DEATH OF TEENAGE STUDENT IN UK 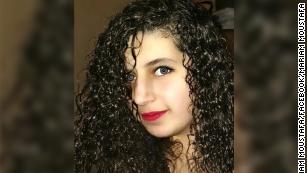 Mariam Moustafa was an Egyptian student who died after being attacked by girls in UK.

(CNN)Egypt is pressing Britain to act over the death of an 18-year-old Egyptian student, who police say was assaulted in the city of Nottingham.

Mariam Moustafa was assaulted outside a shopping mall at 8 p.m. on February 20 and fell into a coma before dying of her injuries on Wednesday, according to Nottinghamshire Police.
Police said there was no information to suggest the attack was motivated by racial hate, but will “continue to keep an open mind.” A 17-year-old girl was arrested on suspicion of “assault occasioning grievous bodily harm” and has been released on bail.
Egypt’s foreign ministry said it was following up the case through the Egyptian embassy in London and would work with the family’s lawyer to make sure the attackers were brought to justice. It also said it would address concerns regarding medical care that Moustafa received after the attack.
Egyptian officials want a parliamentary delegation to visit the UK to investigate the death.
“We are in contact with the Egyptian foreign ministry… to help this delegation to [reach] England as soon as possible,” Alaa Abed, the head of Egypt parliament’s human rights committee was quoted as saying by state news agency Ahram Online.
Moustafa’s death has prompted huge outrage in Egypt, with high-profile celebrities like actor Ahmed Elsaka demanding justice.

The Nottingham Post newspaper reported that Moustafa, who was an engineering student in the city, was punched a number of times by a group of women on February 20.
She then got onto a bus outside the shopping center but was followed onto it by the women who threatened and verbally abused her before they got off, the newspaper reported.
Nottingham City Transport praised the bus driver for trying to keep the group of women away from Moustafa after the attack.
“We would also like to publicly recognize our driver, who went upstairs to intervene and acted as a barrier between the attackers and the young lady, after he asked them to leave the bus,” it said in a statement.
The organization added that CCTV footage from the bus had been provided to the police.
Moustafa’s uncle Amr El Hariry said in a video post on his Facebook account that Moustafa had been discharged from hospital and fell into a coma after she went back to the hospital. He added that authorities had been slow to respond to her case.
“I say that because when the girl was brutally beaten by the group and went to the hospital… the hospital discharged her five hours later and told her that she’s fine despite the fact that she told them that she is feeling terrible.”
“She went back to the hospital in a terrible condition where she was in a coma for many days. She went through about nine surgeries until she died today.”
The British Foreign Office told CNN it is not aware of any contact from Egypt over Moustafa’s death.
Nottinghamshire Police have asked people not to post comments on social media suggesting that the incident was motivated by hate, calling it an “active ongoing investigation,” adding “legal proceedings are active.”

Lindsay Isaac contributed to this report