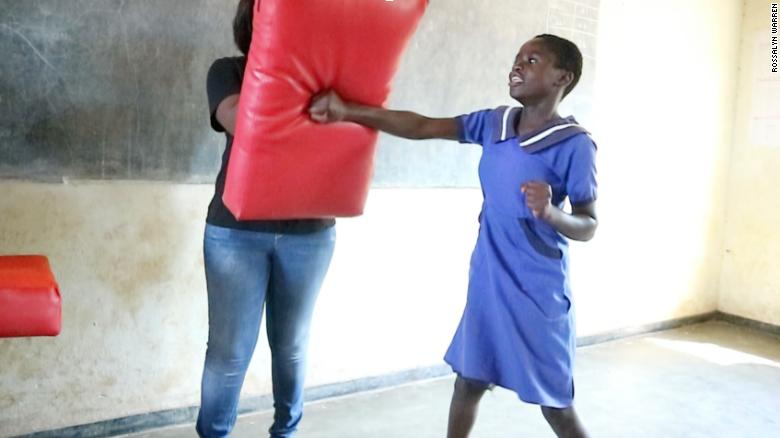 By Rossalyn Warren, for CNN

Editor’s Note: CNN is committed to covering gender inequality wherever it occurs in the world. This story is part of As Equals, a year-long series.

Lilongwe, Malawi — “I am strong,” the girls chanted, their voices filling a classroom in the outskirts of Lilongwe, Malawi’s capital. “I can use my voice. I can use my body!”
The group of about 50 schoolgirls, dressed in indigo uniforms, were being taught to fight off sexual assault. In front of them, Simang’aliso Domoya paced up and down, calling on the pupils to repeat her mantra: “I am beautiful, but I am dangerous!”
The girls, ages 11 to 16, looked at the instructor wide-eyed. Outside the classroom, other students gathered to peer through the windows.
Domoya is a coordinator for the Malawian non-governmental organization Ujamaa-Pamodzi, which teaches self-empowerment and self-defense in classrooms across the country. 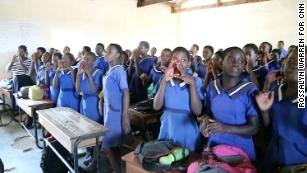 Girls repeat Domoya’s chant: “Don’t touch me. Respect my body!”
The team uses vocal exercises and physical activities to teach girls how to speak out against assault, harassment, abuse, and — if necessary — how to physically fight off attackers.
It’s a critical skill in the country, where one in five girls, and one in seven boys, are sexually abused before the age of 18, according to the 2014 Violence Against Children and Young Women in Malawi report.
The Ujamaa-Pamodzi course was adopted from the No Means No Worldwide program, an initiative to reduce sexual violence and assault in Kenya’s capital. One study found that out of 522 girls, ages 14 to 21, who took the “consent classes” in Nairobi’s Kaariobangi and Korogocho neighborhoods, more than half reported using the self-defense skillsto avert sexual assault in the year after training.
Since the organization first began, Ujamaa-Pamodzi has taught around 25,000 girls and 12,000 boys.
Domoya said they split their instruction into verbal and physical — and both play an important role. 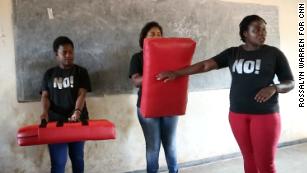 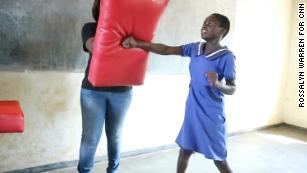 Ujamaa-Pamodzi instructors teach the girls self-defense, and how to say: “No!”
“We encourage the girls to use their spirit to believe in themselves, and to know how defend themselves from assault,” Domoya said. “We also have a safety goal: We encourage girls to get away in each and every situation — not to fight, but to get away and use their voice to shout, yell and speak out.”
Many of the girls CNN spoke with said the workshop has had a real-life impact. They asked that their names not be used in case of repercussions from their families.
One 15-year-old student told CNN that her sister’s husband tried to rape her while she was living in the couple’s home. “I used the verbal skills I learned from their workshop to end the assault, such as warning him I’d tell my sister,” she said.
Later, she contacted one of the Ujamaa facilitators, who advised her to warn her brother-in-law that she would report him to a local child protection organization.
“They [Ujamaa] helped me speak out and use my voice,” she said. “I learned how to help protect myself.”
Harassment is normalized in Malawi, the girls say. A 12-year-old participant of the workshop said the skills she learned have given her confidence to act.
“When I’m walking home from school, sometimes men will try and stop me and touch me,” she said. “And now ever since, I have pushed them off me, or I run away. I don’t freeze up anymore.”
The organization says the majority of cases can be stopped verbally. Their training focuses on self-defense tactics that target an attacker’s eyes, back, groin and knees.
“Some people think at first, ‘Oh, it’s just about martial arts!’ But it’s more than that. It’s helping to teach them to believe in themselves,” Domoya said.
“The way they’ll react to their father is different to how they will react to a stranger … Their response will also differ depending on the attacker’s height, weight, environment. We encourage them to speak to someone they trust, and to not give up hope — to keep talking.”
Beyond the practical life skills, the group also identifies survivors of sexual abuse and harassment in their sessions. So far, the staff have identified and supported more than 400 girls and boys. 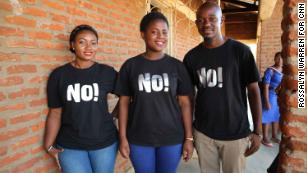 Instructors Simang’aliso Domoya, left, Patricia Mvula, center, and Dominc Luo, right, outside the Lilongwe classroom.
They said the abuse of children is increasingly coming from teachers — an issue they’re tackling head-on in their workshops. Lessons involve a role-playing scenario in which a teacher harasses a pupil.
The group runs classes for boys, too, teaching them about everything from sexual health to healthy relationships, consent and peer pressure. They say the responsibility to end harassment and abuse is up to boys, too.
“To end abuse and gender-based violence, it’s critical to include boys and men,” Martin Ndirangu, the director of the group’s operations in Malawi, said.
The organization also encourages boys to consider “what it means to be a man.”
“We ask them: ‘What does it mean to be a man?’ What should they do?” 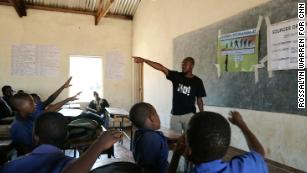 Boys clamber to answer a question in a class on consent and “what it means to be a man.”
“We tell boys there are two moments — one is ordinary moments, the other is moments of truth — where they are put to the test to understand their values. We encourage them to be courageous about what they care about: their future, their family, whatever it means to them,” Ndirangu added.
The response to the program from students is positive: Boys who had said they often feared peer pressure say they now understand the importance of having their own voice. Girls who were previously introverted and shy report a new level of confidence and ambition.
“If a man touches me, then I know no, that’s not right,” one girl said at the end of their session.
Ndirangu cited anecdotal evidence that the program has helped prevent cases of child marriages and teen pregnancies. But he said “raising awareness” isn’t enough to help protect girls and boys in Malawi.
“We think awareness is one thing, but we don’t really see change. It’s not enough just going on radio talking about these things; we need to teach real-life skills. We know we are helping — and we are seeing how they’re using the skills in situations across.

TO END GLOBAL POVERTY WITH THE ABUNDANCE SYSTEM OF THE BILLION COIN (TBC)
…WE ARE HAPPY MEN AND WOMEN.
WATCH THE BELOW YOUTUBE VIDEO FOR PROPER UNDERSTANDING OF TBC…THE BILLION COIN.

“What is TBC and why should you invest in it?: https://youtu.be/u12XOe04_8Y&#8221;.
https://youtu.be/2CIDkiBjKSM. https://youtu.be/4GOhW8Zn0yw
Register here to get your 25000 KRINGLES for free
http://kringle.cash/?link=ogaziecoinz and create your wallet
For more information about the BILLION COIN TBC, VISITE http://www.thebillioncoin.info and read the blog always
Buy KRINGLES or partner with me
KRINGLES to your wallet to qualify for cookie reward on may this year. Each one hundred $ verified purchase will give you one full TBC coin and you will be a millionaire automatically
This is my information
+2347034603282
+971582165813
All in watsup also.