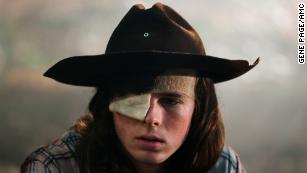 “The Walking Dead” has been an ambling shadow of itself, at times feeling as if the series — immersed in a wartime footing — has drifted away from the attributes that made it such a breakaway hit.
The midseason premiere, which featured a major character death, seemed to put the show back in surer, certainly more emotional territory, while again ending on the sort of cryptic note that simultaneously felt intriguing and possibly like another in a series of irritating head games.
Having been bitten at the end of the last batch of episodes, Carl (Chandler Riggs), the son of main character Rick (Andrew Lincoln), gradually met his end. Carl’s slow-motion demise contained a sense of warmth, sentimentality and loss that has sometimes gone missing from the show, due in part to its seeming determination to shock and tease.
Part of those impulses were still on display, in the form of a bloody disembowelment. Nobody expects a zombie series to be for the faint of heart, but under producer Scott M. Gimple, “The Walking Dead” has periodically tripped over the line that distinguishes edgy from cheap and gratuitous.
Although the AMC hit isn’t what it was, it remains a major cultural presence, and the death of an original character — as well as a significant departure from the source comics — is still something of an occasion. With Carl’s death, the show found a voice that has been scarce of late, both in Carl prodding his dad to reconnect with his humanity, and Rick wondering if that’s feasible, while lamenting what the youth sacrificed in his short, violent life.
“I can’t be who I was. It’s different now,” Rick told him, before promising — as his son spoke of his vision for a better, more hopeful future — “I’ll make it real.”
The episode strengthened those sequences by juxtaposing them with the death of one of Negan’s top henchman, in another test for the character of Morgan (Lennie James), who has gone from resisting violence to ruthlessly if grudgingly embracing it.
Pacifism, simply put, is a luxury those trying to survive this post-apocalyptic world can ill afford. And while that death finally came in a surprising way, it offered a reminder of how elusive mercy is in a show where the real horrors are now almost invariably perpetrated by people.
Alas, praising the episode’s highlights comes with a disclaimer, as those gauzy images of Rick in a calm, idyllic-looking flash-forward came with a surprising addition: Negan (Jeffrey Dean Morgan), his mortal enemy, playfully interacting with Rick’s daughter.
So is the image a dream, or a harbinger of a hard-to-swallow resolution of the current war, given all that has transpired?
Like most big flourishes on “The Walking Dead” — including Carl’s fate — the answer will likely require some waiting. But as with past moments that have felt like fake-outs and misdirection, the producers would be advised not to be too coy about it for too long, lest they undermine an episode that, until that closing scene, felt as if it had gone a long way toward steering AMC’s flagship series back onto the right course.

WHO WANT TO BE A BILLIONAIRE?