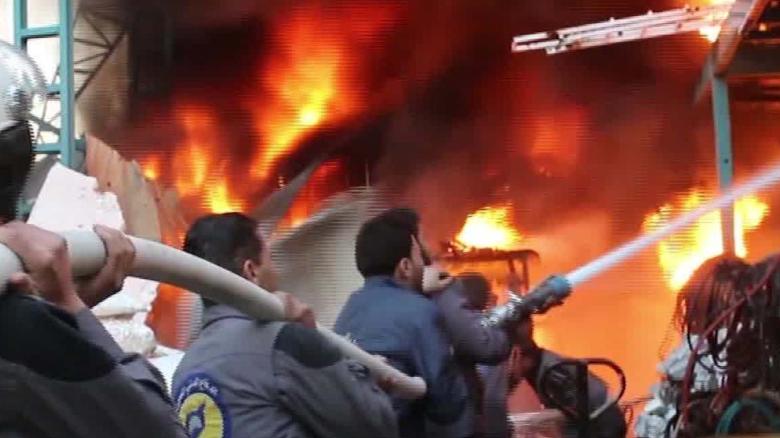 Putin ordered the humanitarian pause — from 9 a.m. to 2 p.m. local time — to start Tuesday, in a bid to prevent civilian casualties, according to state-run news agency Tass.
The report said a humanitarian corridor would be opened to allow civilians to leave.
https://tpc.googlesyndication.com/safeframe/1-0-15/html/container.html 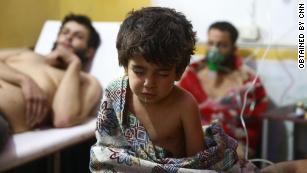 The Syrian American Medical Society said 16 people were treated for exposure to what appeared to be chlorine gas on Sunday, at an Eastern Ghouta hospital.
Russia is the Syrian regime’s key ally in a civil war that has plagued the country for almost seven years, with heavy fighting now focused on the rebel-held enclave of Eastern Ghouta.
Russian intervention — with troops and weaponry — has helped tilt the balance in Syrian President Bashar al-Assad’s favor.
A United Nations resolution on Saturday calling for a 30-day ceasefire in Syria appears to have done little to halt the intense bombardment of Eastern Ghouta, which has now entered its second week. 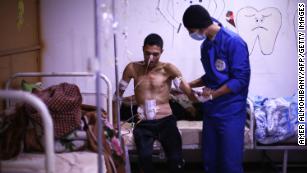 A medic assists a Syrian man who was wounded in airstrikes in Eastern Ghouta on Sunday.
Several people in the suburb were treated for exposure to chlorine gas, opposition groups said, as airstrikes and artillery fire from the regime continued on Sunday.
The Syrian opposition-run Rural Damascus Health Directorate said the people were admitted to medical facilities showing signs that were consistent with exposure to “toxic chlorine gas.”
In a statement, RDHD said that: “The smell of people in the area, ambulance drivers, and victims all had the clear and known smell of chlorine gas.”
A tweet from the Syrian American Medical Society said that 16 patients, including six children, were treated in a hospital “suffering from symptoms indicative to exposure to chemical compounds.” Images obtained by CNN show men and children receiving treatment, some of them using oxygen masks. 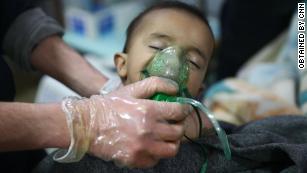 A child received treatment in Eastern Ghouta on Sunday.
The White Helmets, a volunteer rescue group, said in a tweet that one child was killed in a chlorine gas attack in the city.
CNN is unable to independently verify claims that chlorine was used as a weapon in Eastern Ghouta.
Both sides of the conflict have in the past accused one another of the use of chlorine as a weapon, and the government has repeatedly denied claims that it has done so.
Russian Foreign Minister Sergey Lavrov told reporters that allegations of a chlorine attack were a “hoax,” and attacked the White Helmets for promoting what he described as “fake stories.”
The Russian Defense Ministry alleged that “terrorists” hiding in Eastern Ghouta have chemical substances which “might be used for provocations.”

The alleged chlorine attack comes despite a 30-day ceasefire that was supposed to have been implemented “without delay.”
“Nothing has changed,” said Dr Hamza Hassan from Arbeen Hospital in the besieged Damascus suburb. “The airstrikes are continuing. A maternity hospital has just been hit in Saqba (a town in Eastern Ghouta) and is out of service,” he told CNN on Sunday morning. 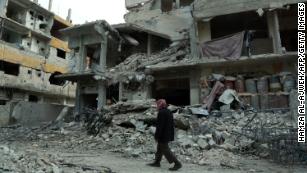 Damaged buildings in Eastern Ghouta, pictured on February 25.
Panos Moumtzis, the UN Humanitarian Coordinator for the area, told CNN: “We have reports at least seven people were killed this morning” after the UN Security Council adopted the resolution calling for a 30-day ceasefire in Syria on Saturday.
For the first time in this latest offensive that began February 18, ground attacks were combined with aerial bombardment, pummeling the rebel-held enclave near the Syrian capital.
The Syrian regime has said that it is targeting terrorists in Eastern Ghouta and that it would continue to pursue terrorist targets even with the ceasefire in place.
“We practice a sovereign right of self-defense, and we will continue to fight terrorism wherever it is found on Syrian soil,” Syrian UN ambassador Bashar Ja’afri said according to Syrian state-run media SANA.

The UN ceasefire resolution, which passed unanimously on Saturday,noted that the “cessation of hostilities shall not apply to military operations against the Islamic State,” al Nusra and other groups associated with them, or groups deemed terrorist organizations by the UN Security Council. 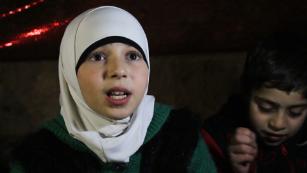 Voices from Syria’s Eastern Ghouta01:33
The main rebel units actively holding territory in Eastern Ghouta are Islamist groups Jaish al Islam and Faylaq al Rahman, who have taken part in peace negotiations in the past. According to activists there are small pockets of Hayat Tahrir Al Sham, an al-Qaeda affiliate, still in the area.
But the ceasefire had no specific beginning, only that it was to come into effect “without delay.” There was no deadline for setting a date for it to begin. And there was no detail on how the truce, once in effect, would be enforced.
Both the Syrian Observatory for Human Rights and SANA reported that shells hit regime-controlled areas in Damascus on Saturday morning. “Armed groups positioned in Eastern Ghouta on Saturday targeted with more than 55 mortar and rocket shells with sniper fire the residential neighborhoods in Damascus and its countryside, injuring a number of civilians and causing material damage,” SANA said.
SANA reported that 21 rocket shells were fired on residential neighborhoods in Damascus City and other areas in the capital.

Speaking to reporters, Russia’s ambassador to the UN, Vassily Nebenzia, said the process of forming the resolution was “extensive and exhaustive” in order to ensure that “it was meaningful.”
“Because by decrees of the Security Council, you cannot install a ceasefire, (a) ceasefire is reached by laborious and painstaking process on the ground,” said Nebenzia. 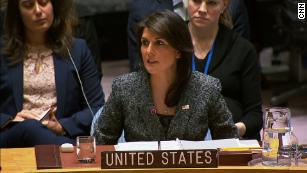 Haley: We are late to respond to Syrian crisis
However, US Ambassador to the UN Nikki Haley rejected Nebenzia’s claims.
“In the three days it took us to adopt this resolution, how many mothers lost their kids to the bombing and shelling? How many more images did we need to see of fathers holding their dead children? All for nothing, because here we are voting for a ceasefire that could have saved lives days ago,” said Haley in remarks made after the ceasefire resolution was adopted on Saturday.
“Our goal with this resolution is clear: The Assad regime needs to stop its military activities around Eastern Ghouta, and for once, allow humanitarian access to all of those who need it,” said Haley, adding that she was unconvinced the Syrian regime would honor the ceasefire.
“We are deeply skeptical that the regime will comply. But we supported this resolution because we must demand nothing less. We owe this to the innocent people of Syria begging for help.” 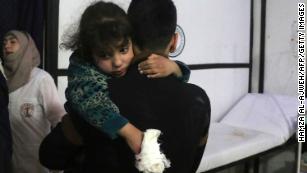 A wounded girl in Eastern Ghouta, pictured on February 22.
In his remarks to the UN Security Council, Nebenzia compared the outcry from the international community over events in Eastern Ghouta to that surrounding the retaking of eastern Aleppo in December 2016.
“We know that the humanitarian situation in Syria is dire and requires urgent measures to be taken,” he said. “However we see perfectly that the propagandistic scenarios which are being unraveled around Eastern Ghouta are in line fully with the campaign, the vociferous campaign in late 2016 during the counterterrorist operation to liberate eastern Aleppo.”
The airstrikes and artillery fire have concentrated on the outskirts of Eastern Ghouta, according to activists inside the city. more than 520 people have been killed and 2,500 wounded since the bombardment of Eastern Ghouta began on Sunday February 18.