Title of Don Jr.’s remarks in India changes amid backlash over conflicts 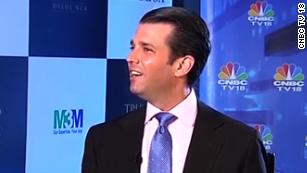 (CNN)As Donald Trump Jr. prepared to take the stage Friday at a conference for business leaders in New Delhi after a nearly weeklong visit to India, the event’s organizers made a late change to the title of his public remarks. The modification, after several days of intense criticism over potential conflicts of interest, appeared to be an attempt to distance the President’s son from any political activity.

The event’s original agenda — up until Wednesday evening — suggested that Trump Jr. would focus on geopolitics during a session titled “Reshaping Indo-Pacific Ties: The New Era of Cooperation.” After CNN raised questions about whether President Donald Trump’s oldest son was mixing politics with private business endeavors, the title was revised to “Fireside Chat with Donald Trump Jr., Executive Vice President, The Trump Organization.”
Other speakers at the event include Netflix CEO Reed Hastings and Uber’s Dara Khosrowshahi, according to the summit’s agenda, which is posted online. Indian Prime Minister Narendra Modi is also scheduled to speak.
business summit comes at the end of a four-city tour to sell Trump-branded condos in India, inflaming concerns about whether the President’s son is crossing ethical lines. Administration critics also want to ensure that taxpayers aren’t paying for special services while Trump Jr. travels for business.
The State Department says he is traveling as a private citizen. As a result, the department has no role beyond routine coordination with the Secret Service regarding travel for members of the President’s family who are under protection.
The Trump Organization has five projects in India, making it the company’s largest market outside the US, a company spokesman told CNN in November. The company, which is licensing its name to local developers, stands to benefit financially if condos in those buildings sell well and for high prices.
As Trump Jr. arrived in India earlier this week, national newspaper ads encouraged buyers to sign up early for Trump-branded condos in Gurgaon — about 20 miles outside New Delhi. The promotion, which featured a picture of the President’s son, promised “a conversation and dinner” with him. That sparked a backlash from ethics watchdogs who are concerned the President and his family are putting a for-sale sign on US policy.
“These advertisements brazenly suggest that people can purchase access to the son of the President of the United States,” said Noah Bookbinder, the executive director of Citizens for Responsibility and Ethics in Washington. “It is an example both of the President and his family using his office to enrich themselves and of an instance where the President’s decision-making may end up being influenced by those who support his businesses.”
Trump Jr. was scheduled to host a similar dinner in Kolkata, where 65% of the Trump Tower apartments have already been sold, according to an invitation seen by CNN.
One of the local developers, Kalpesh Mehta, told CNBC local affiliate TV 18 on Tuesday that they had already sold over $100 million worth of real estate in the Gurgaon towers in India — $15 million alone on Monday, after the Trump Jr. dinner offer appeared in newspapers.
The President’s eldest son admitted it’s hard to steer clear of politics in a local TV interview.
“Obviously, the business responsibility is a great one and even though I’m not in the administration, politics becomes a part of it because I believe in what my father’s doing, and he is certainly up against a lot of adversity,” Trump Jr. said in an interview with TV18.