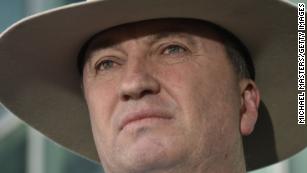 (CNN)Australia’s Deputy Prime Minister Barnaby Joyce said Friday he will resign following weeks of controversy after he announced he was expecting a baby with a former staff member.

Speaking to journalists, he said he was resigning to put aside “this current cacophony of issues.”
“(It has been an) incredible privilege, that I’m so humbled by, to have been the Deputy Prime Minister of Australia,” he told reporters.
https://tpc.googlesyndication.com/safeframe/1-0-15/html/container.html
Joyce is the leader of the Australia’s National Party, which governs in a coalition agreement with the Liberal Party led by Prime Minister Malcolm Turnbull.
In early February, Joyce revealed he was living with a former member of his staff who was expecting his child,confirming long-running rumors of a possible affair.
It was Joyce’s affair which led Turnbull to announce in February all relationships between ministers and their staff would be banned in the future.
He had previously revealed in December he had split from his wife in a statement to the Australian Parliament.
Joyce’s issues haven’t solely revolved around his relationship with a staffer. On Thursday, it was announced the National Party confirmed it had received a separate, formal complaint against Joyce, accusing him of sexual harassment.
“All complaints are taken seriously and treated with the strict confidentiality and given due process,” the National Party federal director Ben Hindmarsh told ABC in a statement.
Joyce has been a controversial figure in the Turnbull Coalition government. In December he was forced to resign and stand for his seat again at a by-election after it was revealed he was a dual New Zealand citizen.
Australia’s constitution doesn’t allow members of parliament to be dual-citizens of other countries.
Joyce said he would step down as leader of the National Party on Monday, forcing a vote to select a new deputy prime minister.
His resignation comes as Turnbull is away from the country on a visit to the United States. Joyce also said that he will carry on as a member of parliament, moving to the back bench.

WHO WANTS TO BE A BILLIONAIRE?

Follow this link to join my WhatsApp group: https://chat.whatsapp.com/LUDK4YsFkc4DaNRm56RcBE