US assault rifles are being sold on Telegram in Syria
By Nick Paton Walsh and Salma Abdelaziz, CNN

US assault rifles are being sold on Telegram in Syria

(CNN)US-supplied weapons originally intended for moderate allies in Syria have ended up for sale on jihadist online forums in the country’s northern al Qaeda heartland.

In a remarkable snapshot of the disastrous outcomes and thwarted ambitions of the West’s six-year effort in Syria, an M16 assault rifle — whose serial number suggests it was originally supplied as part of a US-taxpayer-funded effort to defeat extremists in the region — was offered to CNN by a resident of the city of Idlib over the encrypted messaging app Telegram.
The vendor claimed the weapon originally belonged to one of the more prominent and costly failures by the US to help Syrian moderate rebels combat ISIS and other extremists. In a Telegram message exchange with CNN posing as a purchaser, the vendor said the weapon came from “Division 30” — part of an elaborate $41 million dollar effort to train and equip elite rebels to tackle jihadists.
The M16 was produced by a South Carolina company called FN Manufacturing. It carries a serial number that small arms experts say matches a batch originally thought to have been given to Iraqi security forces by a US assistance program, but that was found in possession of ISIS in 2014.
The following Telegram messages were exchanged between CNN, posing as a purchaser under an alias, and a weapons seller. These messages were translated from Arabic into English.
January 24
[CNN alias]
Aslam Alakoum are you still selling this M16? 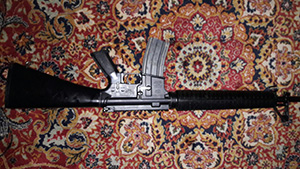 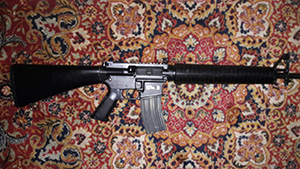 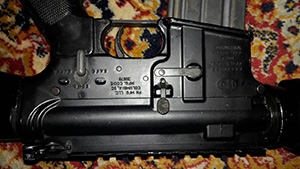 [Seller]
This M16 is for sale, final price 850 dollars but it has a magazine as you can see in the photos.
You only have one?
Yes, the magazine attached to it, only you know the magazine alone is 20 dollars.
Thank you

And you are in Idlib city?
Yes
Inshallah I will give you an answer soon

do you have M16 ammunition for sale?

I have been looking for an M16 like this one where did you get it? From Iraq?

I don’t have ammunition but it is widely available

No, it has the markings of Division 30

How did you find this out?
I wasn’t a member
But that’s what I heard
Which brothers are you with? Maybe we know each other?
I have been wounded for a long time and I reside in Idlib city
While it remains unclear exactly to whom the rifle was originally delivered, it is currently for sale for $850 on jihadi Telegram channels, where a staggering array of weaponry is flaunted by residents of an area known to be dominated by an al Qaeda affiliate.
Grenade launchers, heavy machine guns, thermal sniper scopes and body armor all appear on the jihadist channels, which also offer tips on encryption and even introduce smugglers to get people in and out of Syria. While CNN cannot verify that all of the items offered for sale exist or match their descriptions, the sheer scale of the marketplace suggests some of it, at least, is authentic. The vendor of the M16 was able to offer multiple photo angles of the item.
Division 30 was part of the New Syrian Army, a project by the US military to create moderate rebels in 2015 who would combat ISIS and other extremists.
The group swiftly came undone, however, when al Qaeda-backed extremists intercepted them and their sophisticated weaponry — paid for by the US taxpayer — hours after they drove their convoys into Syria. The group soon disbanded.
[CNN alias]
Is this weapon still for sale? 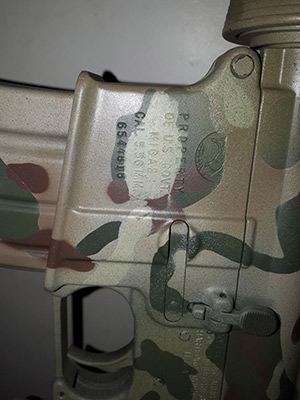 Where can we meet?
In Idlib
At Abu Nour Mosque
I would like to test the weapon
I have been looking for a weapon like this where did you get it? Iraq?
No answer
Damien Spleeters, from the Conflict Armament Research group — which tracks illegal weapons in conflict zones — has spent months collecting and analyzing the small arms swirling around Iraq and Syria. He said the serial number clearly supplied by the vendor of the M16 was close to that of an identical weapon his team had recovered.
“What this weapon does show [is] that this was made in the USA, and it does show that its serial number is very close to another weapon that was recovered from ISIS forces in northern Syria, who presumably stole it from Iraqi security forces earlier,” he said. “It doesn’t mean the exact same thing happened with this weapon, just that it probably shares the same or a similar American source.”
The discovery doesn’t necessarily undermine the vendor’s claim, as it is possible a similar batch of weapons were used to supply the Division 30 project.
US Central Command, initially behind the supply of weapons to Syrian moderates, declined to comment.
Telegram said they block such content when it is encountered or reported to them.
[CNN alias]
Do you have the American M4 for sale?

[Seller]
It is available.
$1500
Can you send me a photo of make, branding and serial number?
Yes
When should I expect the pictures? 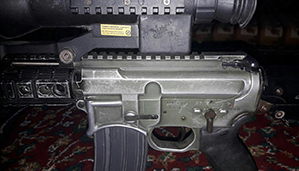 Thank you.
What is your final price?
1450
It has all its parts.
Where are you located?
Idlib
I am in Salqin
When are you available to test the weapon?
Where are you?
Maerat Al Nouman
Do you want to buy the weapon or not?
So I won’t trouble myself for nothing
Yes my brother I want to buy this weapon but I want to test it.
I have been looking for a weapon like this one. Where did you get it? Iraq?

No from Syria
I’ll see you in Idlib Saturday

I hear there are weapons on the market from division 30 Is this M4 among them?
I don’t know for sure but in Idlib there is a big market
The area of Idlib in which the trade appears to be based — and where vendors suggested meeting CNN at a local mosque the next day — is currently the focus of a brutal regime bombing campaign which has targeted many civilians.
At the same time, the region has become a magnet for fleeing ISIS fighters and also an al Qaeda affiliate, Hayat Tahrir al-Sham, which has a complex relationship with al Qaeda, at one point distancing itself from the group.
Yet western officials are concerned at the extremist agenda of the group, and the number of foreign fighters who have joined it, adding it has grown unchecked while the focus has been on defeating ISIS’s so-called caliphate.
The winding path these US taxpayer purchased weapons have taken, ending up in the hands of entrepreneurs in extremist-held areas, is in some ways a testament to the failure of Western attempts to encourage moderates in the Syrian civil war, and the current dominance of hardliners as the war enters another messy year.

WHO WANT TO BE A BILLIONAIRE; (THE BILLION COIN TBC)