But South Korea’s “Unit 684,” created in 1968 following a brazen attack by North Korea on Seoul’s presidential compound, proved anything but.
The experiment to create a crack team of would-be assassins ended in disaster. Seven lost their lives — executed for desertion or criminal activity, and dying from fatigue during the arduous training on a remote island. The remaining 24 members turned on their military trainers, killing most of them in a bloody mutiny.
The bizarre and deadly events that unfolded on the island of Silmido were covered up until details were revealed by a South Korean Defense Ministry Truth Commission in 2006. They’ve also been the subject of a blockbuster movie.
The story resonates today as South Korea embarks on the creation of a new decapitation unit — something it sees as a much-needed defense against its nuclear-armed neighbor.
“The message is if North Korea attacks South Korea with nuclear weapons, South Korea would go after Kim Jong Un and kill [him],” says professor Park Hwee-rhak at Kookmin University. 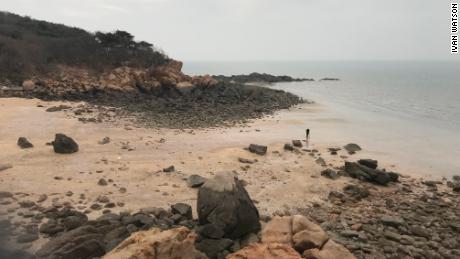 A view of the beach where Unit 684 recruits lived and trained for three years on Silmido until they staged a bloody mutiny on August 23, 1971 and killed 18 of their trainers.

Initially, South Korea’s intelligence agency planned to recruit convicted prisoners on death row. However, the 2006 Defense Ministry report notes that in the event, intelligence officers “recruited civilians and gave them the mission to ‘assault Kim Il Sung’s residence.'”
Yang Dong-soo, a former Unit 684 trainer, told CNN team members were recruited largely based on their physical appearance.
“Intelligence officers approached the men who looked like they might have played sports and had a strong physique and recruited them,” he says.
“These people were either a shoeshine boy, a newspaper boy, a cinema worker or a bouncer.” 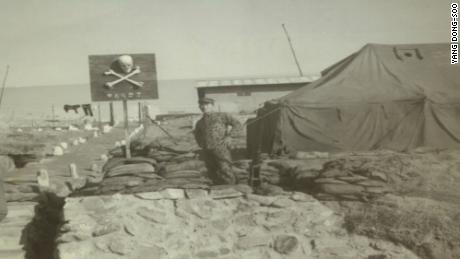 A photo from 1970 shows Air Force Sergeant Yang Dong-soo standing in front of a skull and crossbones sign on the island of Silmido. Yang was assigned to train members of the assassination squad when he was 21 years old. He says the skull and cross bones were real human bones.
Yang was a 21-year old volunteer in the air force when he was deployed to the island of Silmido off the western coast of South Korea in 1970.
Today, the island is uninhabited. It is accessible by foot for several hours a day, when the tide drops opening up a sandbar to a nearby island.
A faded photo from 1970 shows Yang standing in uniform on Silmido in front of a tent and a wooden assassination squad sign decorated with a menacing skull and crossbones. 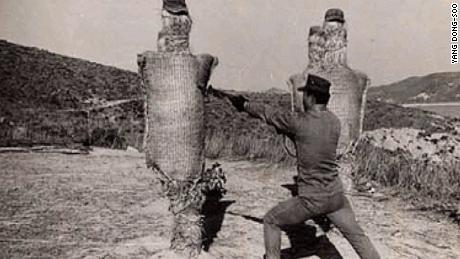 Photo of a training exercise on Silmido. The island served as a training ground for the top secret assassination squad from 1968 to 1971.
“They were real human bones,” Yang says.
Yang says he was charged with teaching the recruits hand-to-hand fighting.
“I taught the recruits the skill they needed to survive. And the most important lesson was ‘to live, you must kill,'” he recalls. 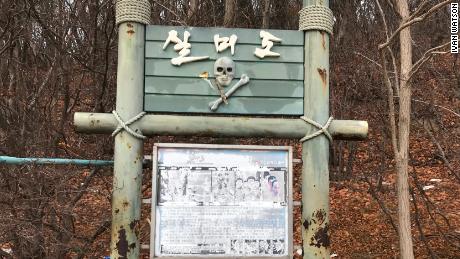 A sign on Silmido has a recreation of the infamous skull and crossbones that was erected at the original training grounds in the late 1960s.
On the island, both recruits and trainers were forbidden from communicating with the outside world. The training was relentless and brutal.
“In the middle of sea survival training, one recruit died of fatigue,” Yang says.
In fact, from 1968 to 1971, seven of the unit’s 31 members lost their lives. According to the Defense Ministry, two men were executed for desertion. Another man was executed for threatening a trainer. Three others were executed or died after an incident in which they escaped the island and raped a local woman. 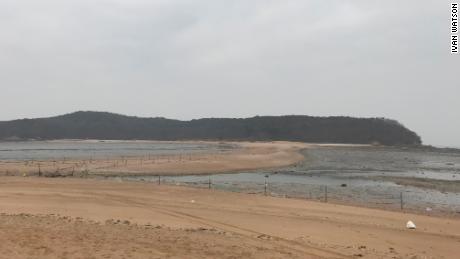 A view of Silmido Island. When the tide drops, it opens up a land bridge to the small, unhabited island.

Throughout their three years on the island, members of Unit 684 were never deployed to North Korea. On top of the executions, fatalities and isolation, basic promises made by recruiters were broken. 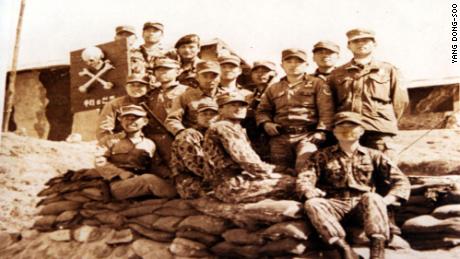 A photo of the Unit 684 trainers on Silmido. Yang Dong-soo is seated in the middle. Eighteen of the trainers died when Unit 684 muntineed on August 23, 1971. Yang barely survived after being shot in the neck.
The 2006 Truth Commission concluded that after the first three months on Silmido, commanders stopped paying the trainees salaries and fed them poor quality food.
And then something snapped. On the morning of August 23, 1971, the assassins turned on their commanders.
Yang says he was preparing to go to the mainland that morning for a monthly supply run when he heard gunfire.
“At first I thought the North Korean special forces are here to take over this island,” Yang says.
Then a recruit shot him in the neck. The bullet entered from the back next to the spine and passed through the left side of his neck. Now 68 years old, Yang shows the pale pink scars on his neck that still mark the bullet entry and exit wounds.
“When I woke up, I was bleeding from my neck and everywhere the trainers were being killed by the recruits or running away, or were being shot again by recruits who were making sure that they were dead,” Yang recalls.
“It was chaos.” 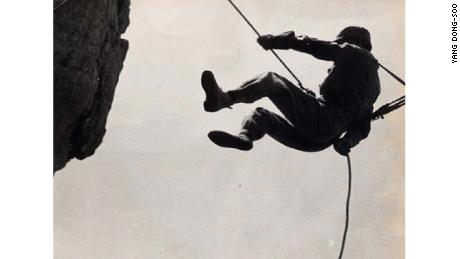 Photo of a training exercise on Silmido. The island served as a training ground for the top secret assassination squad from 1968 to 1971.
Yang says he dragged himself down to the dark, oyster-encrusted rocks that line the beach. Bleeding profusely, he hid under stones and prayed to God that his former students wouldn’t find him.
Though they never found Yang, the members of Unit 684 killed 18 of their trainers on the island. And they weren’t finished.
The assassins made their way to the mainland and then hijacked a bus to Seoul. There, they clashed with soldiers and police. Dozens of security forces and civilians were killed and wounded. 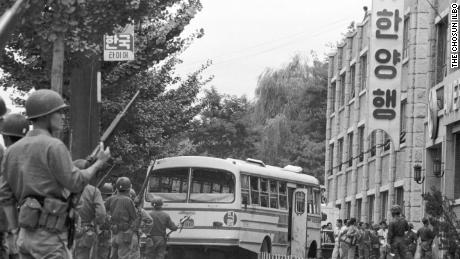 South Korean troops guard the bombed out remains for a bus hi-jacked by Unit 684 mutineers.
The battle ended when an explosion on the bus killed 20 of the mutineers. Four survived the blast. They were tried in secret, and all four were executed on March 10, 1972.
“After the execution, the bodies were not handed over to the families,” the Defense Ministry wrote in 2006.

The Truth Commission stated that the air force commanders in charge of Unit 684 engaged in a cover-up, burning documents related to the deadly failure.
“The truth of the incident had been a closely kept secret,” the commission concluded.
Nearly half a century after Unit 684 ended in bloody failure, there are signs the South Korean military is avoiding previous mistakes with its new assassination squad. 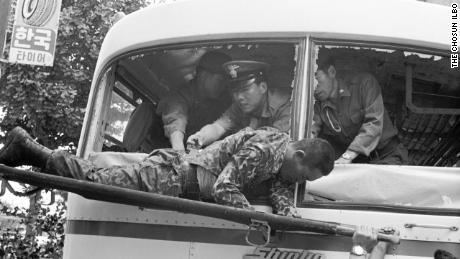 South Korean security forces carry one of the Unit 684 survivors in 1971. A 2006 Defense Ministry Truth Commision report revealed 20 mutineers were killed on board the bus. Four survivors were later executed.
Officials have provided few details about the new unit, which has been titled the “Special Task Brigade.” Unlike its predecessor — which was comprised entirely of civilian volunteers — the contemporary force has been recruited from the military’s highly trained special forces.
Defense Minister Song Young-moo told lawmakers last September that the new force would take approximately a year to put together. In December, South Korean military held a ceremony closed to the public to mark the creation of the decapitation unit.
A National Assembly officer told CNN that South Korean’s Defense Ministry plans to inject 57.7 billion won ($50 million) in the next few years to equip the brigade with necessary weapons and ammunition.
The purchase list includes see-through-the-wall radars, “suicide” drones and grenade launchers, another parliamentary staff member confirmed.