02/17/201802/17/2018
Most of these people do not live in the United States, and you can bet your bottom dollar that Russia won’t be extraditing them any time soon. But that’s not the point.
The point is this: The indictments of a baker’s dozen of Russians gives us a very clear window into not only the depth and breadth of the Mueller investigation, but also makes crystal clear what the Russians wanted in the 2016 election and the elaborate measures they undertook to make it happen. 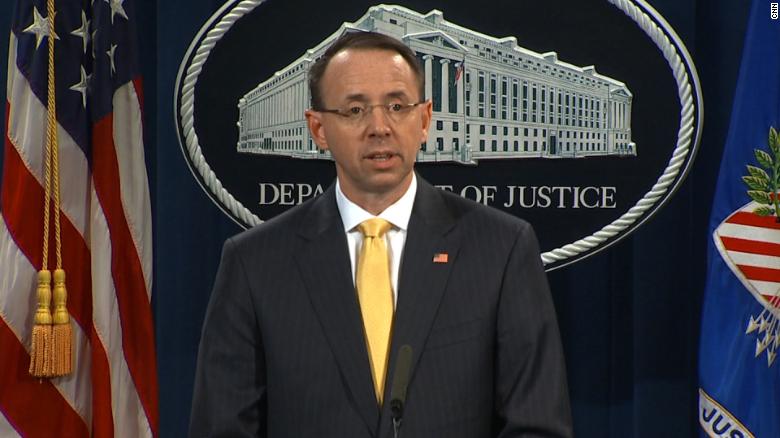 (CNN)On Friday afternoon, the Justice Department announced that special counsel Robert Mueller had indicted 13 Russian nationals for their roles in attempted meddling in the 2016 election.
Most of these people do not live in the United States, and you can bet your bottom dollar that Russia won’t be extraditing them any time soon. But that’s not the point.
The point is this: The indictments of a baker’s dozen of Russians gives us a very clear window into not only the depth and breadth of the Mueller investigation, but also makes crystal clear what the Russians wanted in the 2016 election and the elaborate measures they undertook to make it happen.
This paragraph stands out:
“Defendant ORGANIZATION had a strategic goal to sow discord in the U.S. political system, including the 2016 U.S. presidential election. Defendants posted derogatory information about a number of candidates, and by early to mid-2016, Defendants’ operations included supporting the presidential campaign of then-candidate Donald J. Trump (“Trump Campaign”) and disparaging Hillary Clinton. Defendants made various expenditures to carry out those activities, including buying political advertisements on social media in the names of U.S. persons and entities. Defendants also staged political rallies inside the United States, and while posing as U.S. grassroots entities and U.S. persons, and without revealing their Russian identities and ORGANIZATION affiliation, solicited and compensated real U.S. persons to promote or disparage candidates. Some Defendants, posing as U.S. persons and without revealing their Russian association, communicated with unwitting individuals associated with the Trump Campaign and with other political activists to seek to coordinate political activities.”
OK. So what we know from that paragraph of the charging documents, which you can read in full here, is this:
None of that is a smoking gun of collusion.
“Unwitting” members of Trumpworld working with Russians, who didn’t identify themselves as Russians, is not the same as a willful effort on behalf of members of the Trump campaign to actively collude with the Russian government.
But what this latest set of indictments proves beyond a shadow of a doubt is that, yes, Russia staged an aggressive and elaborate effort to influence the 2016 election.
This was a multi-pronged campaign — social media, in-person meetings, political rallies — by the Russians to beat Hillary Clinton and elect Donald Trump. It employed hundreds of people.
That analysis, of course, jibes with the unanimous conclusion of the intelligence community in 2017 that Russia actively sought to influence the 2016 election in support of Trump.
What it runs directly counter to is Trump’s ongoing — and persistent — attempts to cast the entire special counsel investigation as nothing more than a politically motivated sideshow.
Here’s a sampling of Trump’s recent tweets touching on Mueller’s investigation.
“This memo totally vindicates ‘Trump’ in probe. But the Russian Witch Hunt goes on and on. Their was no Collusion and there was no Obstruction (the word now used because, after one year of looking endlessly and finding NOTHING, collusion is dead).” (2/3/18)
There’s lots (and lots) more tweets and quotes just like that from the President. Trump has suggested the attempted election hacking could have been perpetrated by China or even as a “guy sitting on their bed who weighs 400 pounds.”
You get the idea. Despite the unanimous conclusion of the intelligence community — including Trump’s CIA Director Mike Pompeo and his FBI Director Christopher Wray — that Russia engaged in a coordinated effort to meddle in the 2017 election, Trump still wasn’t convinced.
Of course, this changes nothing when it comes to how Trump will respond. Even Friday afternoon, Trump tweeted about the Russian indictments, once again beating the “no collusion” drum.
“Russia started their anti-US campaign in 2014, long before I announced that I would run for President,” Trump tweeted. “The results of the election were not impacted. The Trump campaign did nothing wrong – no collusion!”
But if it was very hard to hold the Trumpian position — it might have been Russia, it might have been someone else! — with a shred of intellectual honesty prior to Friday, it’s impossible now.
Consider what the Mueller investigation has already done:
Former national security adviser Michael Flynn has pleaded guilty to lying to the FBI about his contacts with Russians during the 2016 campaign and is cooperating with the Mueller investigation.
That is not the stuff of witch hunts and hoaxes. Those are real-life charges which carry at least the possibility of real jail time.
And they all make a simple point: It’s long past time for Trump to stop name-calling an investigation that has uncovered a massive effort for a foreign government to meddle in a US presidential election.