Skating to “A Day in the Life” by The Beatles, North Korea’s figure skaters received huge cheers as they took to the ice at the Gangneung Ice Arena at the Winter Olympics in South Korea.
Ryom Tae Ok and Kim Ju Sik proved why they were the only North Korean athletes to qualify for the PyeongChang Games.

They immediately went into second place in the qualifying round with a score of 69.40, behind the Olympic Athletes for Russia on 70.52. But with 12 more teams to compete, they’re not guaranteed a place in the finals.

North Korea’s Ryom Tae Ok (L) and North Korea’s Kim Ju Sik competed in the pair skating short program event.
Few athletes were under more scrutiny at the 2018 Winter Games. Ryom, 18, and Kim, 25, were the only athletes to compete under their country’s flag; North Korea’s hockey players are competing as part of a unified Korean team.
The duo were supported by a huge squad of North Korean cheerleaders, who have traveled to Pyeongchang for the Olympics. The squad, dressed in matching red jackets and white hats, also loudly cheered on South Korean skating duo of Kim Kyueun and Alex Kam.
But the cross-Peninsula support didn’t help the South Koreans, who scored a disappointing 42.93 after Kim took a hard fall onto the ice. The score obviously hit them hard, with Kim on the verge of tears speaking to reporters after the performance.
The crowd cheered as the pair ended each portion of their routine.
The North Korean pair originally qualified for the Winter Olympics in September, but North Korea’s National Olympic Committee (NOC) missed the deadline to register them for the Games.
After a sudden and dramatic rapprochement between the two Koreas, however, the International Olympic Committee agreed to extend the deadline for North Korean participation.
“The IOC’s mission is always to ensure the participation of all qualified athletes, beyond all political tensions and divisions,” the IOC said in a statement.
After their performance, the North Korean skaters smiled broadly and ignored question from reporters as they walked past the international press. They later said they were grateful for the support of the Korean people.
Skating with ‘happiness’ and ‘passion’
The pair secured one of the final Olympic spots after producing an impressive free-skate performance, again to “A Day in the Life,” at the Nebelhorn Trophy in Germany in September.
Previously, Ryom and Kim had spent the summer training in Montreal under renowned Canadian coach, Bruno Marcotte. 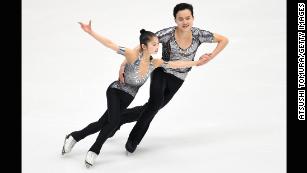 The secret to North Korea’s skating success 02:46
Marcotte told CNN the two North Koreans exhibit “happiness” and “passion,” while skating and called them “a joy to work with.”
“Their goal — all we talked about — is how they can get their score higher. And they want to take one step at a time. You know, the next goal is to come in top five at (the) Worlds. The only thing we talk about is how can they progress (in) the world ranking.”
Marcotte is also coach to Canadian world champions Megan Duhamel and Eric Radford.