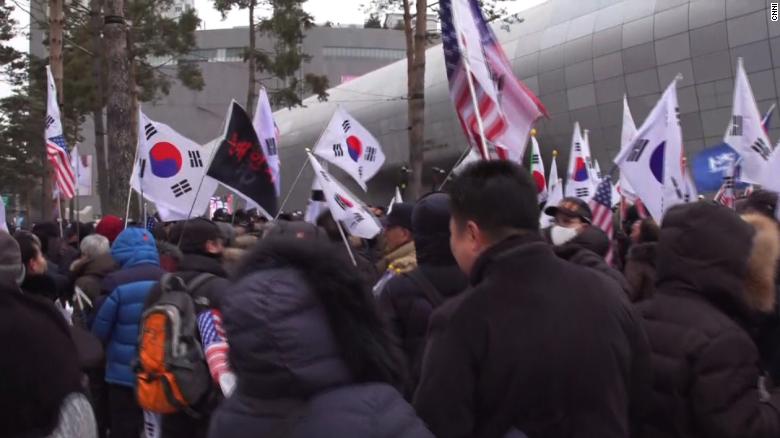 (CNN)North Korea’s delegation to the Winter Olympics returned to Pyongyang on Sunday, ending a three-day visit that amounted to a remarkable diplomatic breakthrough for the South Korean government but left big questions about whether it could lead to a solution to the decades-long military standoff between the two nations.

A private jet took off from Incheon airport in South Korea, carrying Kim Yo Jong, the younger sister of North Korean leader Kim Jong Un, and the rest of the North’s unprecedented deputation whose presence drew the spotlight away from sporting endeavor and raised uncomfortable questions for South Korea’s allies.
Crucially, they left South Korean President Moon Jae-in with a diplomatic conundrum that could be a defining moment for his leadership — whether to accept an invitation to Pyongyang for talks with his North Korean counterpart, who presides over a nation where opposition is brutally suppressed, senior officers face execution if they stand in his way, and even his own family members are eliminated if they are perceived to pose a threat to his power.

If the encounter took place, it would be the first between Kim and a South Korean president, and the first North-South summit on the peninsula since 2007. While it would be a diplomatic coup for Moon, who was elected on a promise to pursue warmer relations with the North, it could strain relations with the United States, which has appeared uncomfortable at the warm welcome afforded to the North Korean delegation over the past few days.

The diplomatic honor bestowed upon North Korea was rare: Moon met Kim Yo Jong, the first member of the North’s ruling dynasty to have visited South Korea, four times during the trip. Moon’s chief of staff, Yim Jong-suk, held a private farewell dinner for the delegation at a hotel in Seoul on Sunday.

Kim Yo Jong again sat with President Moon to watch a North Korean art troupe performance in Seoul on Sunday, with both sides expressing hope that the diplomatic overtures would continue after the Games had ended.

“Always stay healthy. Make sure you visit Pyongyang with President Moon,” Kim Yo Jong said to first lady Kim Jung-sook after the concert, according to pool notes from South Korea’s Blue House.

North Korea’s 90-year-old ceremonial head of state, Kim Yong Nam, said he shed tears three times during the performance, telling President Moon: “I return with the hope that we will meet again, having created a momentum and opportunity for frequent revisits and exchanged views with the president.”

South Korea’s principal opposition party, the Liberty Korea Party, was not impressed. It warned against agreeing to talks before North Korea scrapped its nuclear program, saying it would only “benefit the enemy”.

“We should firmly keep in mind that any talks where denuclearisation is not a precondition only to buy North Korea more time to complete its nuclear capabilities while they fool us with their peace offensive facade,” party spokesman Chang Je-won said, according to Reuters.

Despite favorable coverage in the South Korean media that largely ignored the horrors inflicted on North Koreans by Kim’s regime, many ordinary South Koreans were skeptical of the North’s motives.

Hundreds of protestors gathered in Seoul on Sunday to vent their anger at what they called the “Pyongyang Games.” Some burned North Korean flags and photos of Kim Jong Un at the rally.

One protester, who gave her name only as Laila, told CNN she was angry at President Moon. “It is the fake peace, this is ‘peace Olympics.'”

“She (Kim Yo Jong) is not charming, she is a dictator’s sister,” Laila said.”She is not looking after North Korean people. They have people hungry in North Korea.”

Others, such as 23-year-old Yoon Jun-young, were angry that that North Korea’s participation on the international sporting stage had come without any political concessions. “Her being here is not that bad, but I feel North Korea has shown up to the Olympics without paying,” Yoon told CNN during Saturday’s hockey match between Switzerland and the unified Korean team.

Now, South Korea’s allies must decide whether to stand back and allow Moon to pursue his policies of reconciliation, or put the screws back on to Pyongyang.

For its part, Japan has made clear that it favors the swift resumption of joint US-South Korean military exercises, which had been put off until after the Olympics in an effort to smooth the path for North Korea’s participation at PyeongChang.

“Now is not the time to postpone US-South Korea military exercises. It is important to move forward with the drills as planned,” Japanese Prime Minister’s Shinzo Abe told Moon in what appeared to be an awkward encounter, the Blue House said.

Moon made it clear that the issue was an internal affair and that it was inappropriate for Abe to have brought up the matter, Reuters reported.

US Vice President Mike Pence was at pains to insist that Washington and Seoul were on the same page as he returned to Washington from leading the US delegation to the Olympics. “There is no daylight between the United States, the Republic of Korea, and Japan on the need to continue to isolate North Korea economically and diplomatically until they abandon their nuclear ballistic missile program,” Pence told reporters on the flight back to the US.

Just days into the 2018 Winter Olympics, it is clear that it will be remembered as much for political gymnastics as sporting prowess.

CNN’s Taehoon Lee and Sandi Sidhu contributed to this report.